– I was…deeply touched to hear instruments from two different cultures playing in such beautiful harmony and sounding completely compatible with each other. Duo YUMENO’s wonderful appeal comes not only from the unique combination of their instruments but from Kimura and Tamaki’s superb technique and impeccable ensemble work. ―
Yasuko Tazumi, Jury President, Kyoto Aoyama Music Award  (2015)

Kimura and Tamaki first collaborated at the Fort Wayne Cherry Blossom Festival in 2008 and since then, have been performing together regularly in Japan and the US. Between 2010 and 2013, they have presented the Kacho-fugetsu concert series, for which they commissioned works by Marty Regan over a four-year period. In recognition of this series, they were awarded the Janet Latz Professional Fellowship in 2011. This project was culminated in their debut CD, “Flowers, Birds, Wind, Moon” that was released in 2015.

Since 2010, they have held a successful annual tour to Japan that has extended to such cities as Tokyo, Kyoto, Osaka and Nara. Some of the notable venues are the Tokyo National Museum, Owada Densho Hall (Tokyo), the Aoyama Music Memorial Hall (Kyoto), World Heritage Sites; Kasuga Grand Shrine, Yakushi-ji Temples, Toshodai-ji Temple and Ryoan-ji Temple. In 2013, the duo was invited to Turkey performing at the former Consulate General of Japan in Istanbul and at Namik Kemal University in Tekirdag. In 2014, they were featured at the opening concert of “Japan – CARICOM (14 Caribbean countries) Friendship Year 2014” – in Trinidad and Tobago. In 2015, the duo was invited to perform at Clare Hall, a constituent college of the University of Cambridge, to present a concert featuring classical and modern works for Japanese instruments. In 2016, they gave a feature performance at Chamber Music America’s national conference. In the following year, the duo was invited to the National Cherry Blossom Festival and performed at John F. Kennedy Center as well as the residence of the Japanese ambassador to the United States in Washington, D.C. They were also resident artists at the Los Andes University in Columbia in 2018 and at the Harrison House in 2020.

Since 2015, the duo has commissioned a suite of pieces based on The Tale of Heike – one of the masterpieces of Japanese literature – to Daron Hagen, and in 2022-2023, this suite will be released from Naxos label.

About the duo’s name

The duo’s name YUMENO 夢乃 means “of dreams” in Japanese. It is taken from a scroll which was given to Hikaru by Soko Morinaga (1925-1995), the Zen Buddhist master from whom Hikaru received his name. The text reads 夢乃里無片雲 (In the land of dreams, not a single cloud exists.) The duo cherishes the scroll and took the first two characters for their name, hoping that their dreams will be as clear as a pure blue sky.  Duo YUMENO website 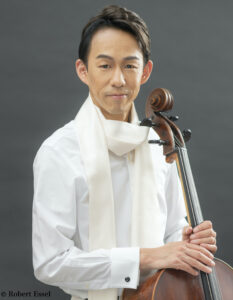 Hikaru Tamaki concertizes regularly as a soloist, chamber musician and orchestral player in the US and Japan. He served as the principal cellist of the Fort Wayne Philharmonic and was a member of the Freimann String Quartet from 2001 until 2013. Solo performances with the Fort Wayne Philharmonic have included numerous major concertos in the cello repertoire. Tamaki was a prizewinner in the prestigious All Japan Viva Hall Cello Competition in 2000.

During his annual visits to Japan, he has given solo performances, lecture concerts and chamber concerts. He was a member of the Arcadia Piano Trio and performed together with them at various venues in Japan and the U.S., including the United Nations. He has given a lecture concert at Gakushuin Women’s College in Tokyo, and his activities have been featured in the media such as the Yomiuri and Kyoto Shinbun newspapers. In 2008, he released his first solo album, which includes the works of J.S. Bach and Toshiro Mayuzumi.

In 2008, he began collaborations with Yoko Reikano Kimura (koto/shamisen) under the moniker Duo YUMENO. They have given concerts and workshops at various venues such as Carnegie Hall, John F. Kennedy Center, University of Cambridge and Princeton University. The duo was awarded the Chamber Music America Classical Commissioning Program grant in 2014, and in the following year, received the Aoyama Baroque Saal Award.

From 2016, he has served as the principal cellist of the Berkshire Opera Festival and is also a member of the Albany Symphony Orchestra and the Allentown Symphony Orchestra. He has performed in such venues as Carnegie Hall, Symphony Space, Town Hall and Fisher Performing Arts Center.

Born in Kyoto, Tamaki’s studies in Japan were with Noboru Kamimura and Peter Seidenberg. Studies in the United States began at the Eastman School of Music, where he was named a George Eastman Scholar, and continued at Rice University and Northwestern University for his graduate degree. His teachers were Paul Katz and Hans Jorgen Jensen. Hikaru Tamaki website