Yoko Reikano Kimura is one of the most captivating artistic voices of Japanese koto and shamisen consistently praised by critics for her musical elegance and versatile repertoire. Based in the US and Japan, Kimura has concertized in major venues around the world, and is admired for her authoritative interpretation of the classics and her passionate advocacy of new music.The New York Times described her shamisen playing and singing as “superb.” New York Classical Review described her performance as “played with poise and verve.” San Francisco Examiner also praised, “an elegant refined presence perfectly poised, she played with precision, beauty and the utmost confidence.”

Kimura has won numerous awards and grants including the First prize at the prestigious 10th Kenjun Memorial National Koto Competition as the first Yamada school player (2003); Kyoto Aoyama Barocksaal Award (2015); Chamber Music America Classical Commissioning Program grant (2014); the Janet Latz Professional Fellowship (2011); the Japanese Music Audition for NHK-FM (2005); a scholarship from the Agency for the Culture and Affairs in Japan (2004); the First prize at the Great Wall International Music Competition and the Osaka Chinese Counsel Award (2002).

As a koto soloist, Kimura premiered Koto Concerto: Genji – 13 string koto version – composed by Daron Hagen with the Euclid Quartet in 2013, and championed this work for many years including the performances with the Wintergreen Music Festival Orchestra conducted by Mei-Ann Chen in 2018; the string quartet members of the New Japan Philharmonic in 2021 (Japan Premiere); INTERWOVEN in 2021 (New York Premiere); New Asia Chamber Music Society in 2022. Kimura gave the world premiere performance of Kaito Nakahori’s Japanese Footbridge for koto and chamber ensemble at the Jordan Hall in 2014, and gave the US premier of James Nyoraku Schlefer’s Concertante with Texas Festival Orchestra at the Round Top Music Festival in 2015.
As a shamisen soloist, she performed Shamisen Concerto at the National Olympic Memorial Center in 2004. Kimura recorded various classical shamisen works for the online music archive, Traditional Music Digital Library which has been viewed worldwide. In 2015, Kimura was invited to perform at the Asia Society Texas Center with Aperio. In 2016, she performed with American Symphony Orchestra in Pietro Mascagni’s opera Iris as the shamisen player. In 2017, Kimura commissioned and gave a world premiere performance of Marty Regan’s Shamisen Concerto No.1 Polaris. In 2022, Kimura was selected as the only Japanese instrumentalist for Rashaad Newsome’s Assembly.

In 2009, Kimura founded Duo YUMENO with cellist Hikaru Tamaki. The duo offers a unique fusion of sound that explores both traditional Japanese music and Western classical music, commissioning new works and creating their own arrangements. Yasuko Tazumi, the Jury President of Kyoto Aoyama Award, praised “the voices of the koto and cello shifted in color like a kaleidoscope, creating a variety of rich and expressive tones.” In 2015 they released their first album, Flowers, Birds, Wind, Moon: Music by Marty Regan. The duo was featured at Chamber Music America’s 2016 National Conference. In 2017, they performed at the John F. Kennedy Center and the residence of the Japanese ambassador to the United States in Washington, D.C. Currently, the duo is working on a commissioning project with composer Daron Hagen on a suite, Heike Quinto based on The Tale of Heike. This suite will be released from Naxos label in 2023. 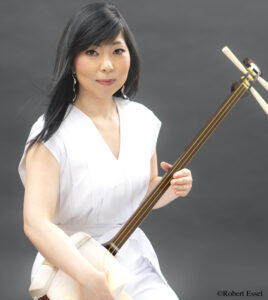 Born and raised in Saitama, Japan, Kimura started piano from the age four, but took an interest in many types of music. Kimura started Yamada style koto studies with Yukano Inoue at the age ten. At the age fourteen, Kimura began her intensive koto training with Kono Kameyama, the foremost Yamada style performer and a leading disciple of legendary koto and shamisen performer, Kin’ichi Nakanoshima. She graduated from the Tokyo University of the Arts and Music, where she was awarded the top prize for her graduation recital. In 2000, she received her stage name Reikano and Kyoju (master) certificate from Hiroko Nakanoshima Ⅵ. While advancing her studies in Japanese classical music, Kimura took a deep interest in new music written for Japanese instruments. Kimura continued her studies at the NHK (Japanese national broadcasting corporation) School for Young Professionals. At the Institute of Japanese Traditional Music, she studied contemporary music with Akiko Nishigata, who pioneered the performance of new musical repertoire on the shamisen. In the genre of the Kato style shamisen – a genre closely related to Yamada style koto music – Kimura studied with Senko Yamabiko, a Living National Treasure, and received the name Reiko Yamabiko. Before moving to the US in 2010, Kimura was a faculty member at Senzoku Gakuen College of Music and a koto instructor at Kiryu University. As a Japanese instrumentalist, she continues her performances in Japan and holds a teaching position at the Institute of Traditional Japanese Music, an affiliate of Senzoku Gakuen College of Music. Since Kimura moved to the US, she has given workshops and lectures at various educational institutions, such as Harvard University, Columbia University, Princeton University, University of Chicago, Duke University, University of Hawaii and New York Philharmonic’s educational program. In 2022, Kimura served as the consultant (Japanese koto) for the Carnegie Hall’s educational program.

Biography is not for reproduction. For most up to date biography, please contact here